Last week, the University of Chicago Law School unveiled two new websites, designed and built by yours truly. One is an online version of our alumni magazine, The Record. The Record Online will contain many of the same stories as the print version of the magazine, but will enhance them with extras like audio and video, as well as the ability for our readers to comment on the stories. 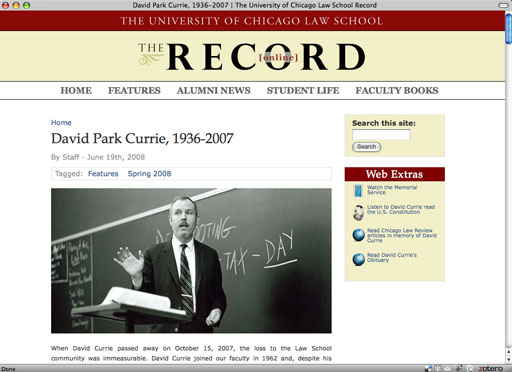 The second site is one devoted to a little experiment that we’re running here at the Law School, which we’re calling “Ideas Are Everywhere.” The plan is to send copies of our faculty’s more accessible works (beginning with Richard Posner’s How Judges Think and Martha Nussbaum’s Liberty of Conscience) out into the world, with labels asking people to visit the “Ideas Are Everywhere” website. We’ll ask them to tell us where they found the book (which we’ll track on a Google map), and what they think of the ideas contained therein; we’ll also request that they pass the book on by leaving it in a coffeeshop, on an airplane, or anywhere else an interested party might find it. 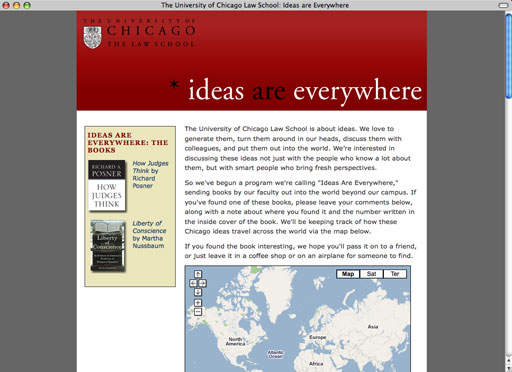 Certainly, neither of these sites is earth-shaking in regards to its design or functionality. But they each gave me a chance to try something new. The Record Online was my first stab at creating a site using the open-source content management system Drupal, which we’ll be adopting when the Law School launches its new primary website in the fall. It gave me the chance to poke around under the hood and try to wrap my mind around the way Drupal works (though I have much, much more to learn!).

The “Ideas Are Everywhere” site, on the other hand, is built on Typepad (which we also use for our Faculty Blog); the challenge here was to make a site built on a blogging platform feel as little like a blog as possible. Given that I had about a week to get the site up before the first books were to be distributed — projects at universities seem to either drag on interminably or have to be done immediately — I needed to be able to quickly and easily give readers the ability to comment and to subscribe to comment feeds. Using Typepad but removing many of the traditional markers of a blog seemed to be the most time- and cost-efficient way of doing so.

So what do you think? See any room for improvement on these sites?