While my day job as Manager of Electronic Communications at the University of Chicago Law School tends to lean more toward the tech and information architecture sides of web-work than the design side, I do occasionally get to undertake projects that use as much of the right side of my brain as they do the left (while our upcoming site-wide redesign promises to explode both sides).

Since starting the job in August of last year, I’ve had the opportunity to do a couple of these projects. The highest profile one so far was a redesign of our Faculty Blog, which had been launched in 2005 using a slightly modified version of one of Typepad’s standard issue templates: 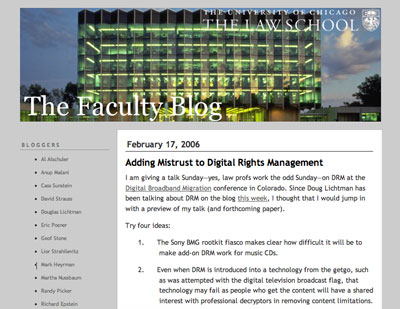 When I redesigned it this past fall, my primary goal was to make it more usable — get rid of the gray text on a gray background, add a prominent search box and make it easier for visitors to subscribe to the blog and get to the Law School website. I also separated out the podcast feed and added a widget in the sidebar so people could listen to the podcasts without leaving the blog page. 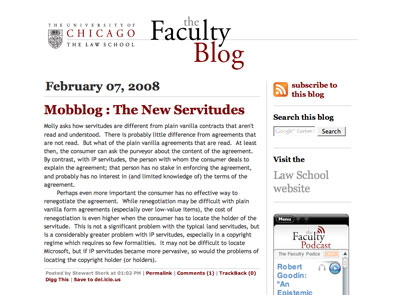 I was very pleased to see a presenter at the CASE V conference in December hold up the redesigned blog as an example of higher ed institutions “using social media well.”

I also used this design as inspiration for a Flash e-card that the Law School’s Annual Fund asked me to create. Considering it was my first attempt at Flash, I think the card came out pretty well. This was an especially fun project because I had the chance to create the music for the card as well. The music for these things is usually classical music calculated to be almost unnoticeable. I used a collage of samples from Apple’s Garageband program to create a piece that sounds to me a bit like it could have come from “Six Feet Under;” I even had someone ask me where they could purchase a copy.