The Law School now has its very own Twitter account, which can alert you to newly added content from everything from our Faculty Podcast to our alumni magazine.

If you’re the curious type and are wondering how I accomplished this feat, read on.

When we in the Communications department here at the Law School first started trying to figure out how we might be able to use Twitter, our first inclination was to aggregate the Twitter feeds of our brave student and faculty Tweeters into a single stream and feed it back into Twitter. We eventually settled on the TweetChicago format for two reasons. Most importantly, we felt that format did a better job at putting faces to stories, but also… it is much harder than it sounds to effectively aggregate Twitter feeds.

I recently decided to tackle the problem again in order to address a long-standing problem with our Facebook Page. One of our goals for the Facebook page was to allow our “fans”quick access to our various blogs and podcasts, and while RSS aggregating apps exist for Facebook, most of them don’t really seem to work — I was having to manually refresh. The best way to get an RSS feed into Facebook remains their “Notes” application, but you can only import one feed at a time into Notes. So what’s a poor Manager of Electronic Communications to do?

Now, I’m no programmer, so I knew I was going to have to turn to a third-party tool. Initially, I tried FeedInformer (formerly FeedDigest), a service I’ve had some success with in the past. However, just pulling a bunch of feeds together and outputting a list wasn’t going to make much sense to our end users; how were they supposed to know whether the post they were about to click on came from our Faculty Blog, our Admissions blog, our Student Events podcast, or what? We needed a way to add a prefix to the title of every post that explained which feed it was coming from.

I was going to have to use (gulp) Yahoo Pipes.

I had tangled with Pipes once before, when attempting to create a simple aggregated feed of Tweets from members of the UWebD community. While making that pipe any more complex than a simple aggregation was beyond my skills due to the vast amount of potential data involved, I figured that with a small set of feeds I could jerry-rig something that might work.

I began by creating a pipe for each of the feeds I wanted to include (including all the aforementioned blogs and podcasts as well as a del.icio.us feed of Law School-related news stories. As you can see in the screen shot below, these pipes just 1) grab the feed, 2) replace the beginning of the post’s title with a prefix reflecting the feed it comes from, 3) sort the feed by pubDate and 4) outputs the feed. 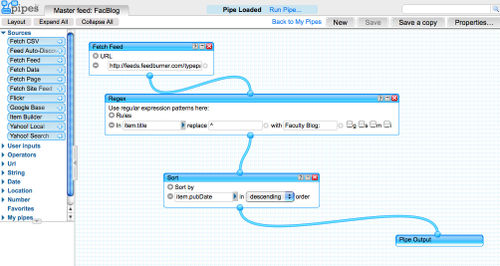 The next step was to aggregate all of those pipes into one. This “master pipe” 1) grabs each of the earlier pipes 2) removes the author tags (for some reason, they were creating problems in the output) 3) sorts by pubDate again 4) truncates the feed to 10 items for the sake of simplicity and 5) outputs the feed, which I can import to our Facebook Notes or (ta-da!) route to the UChicagoLaw Twitter account via Twitterfeed. 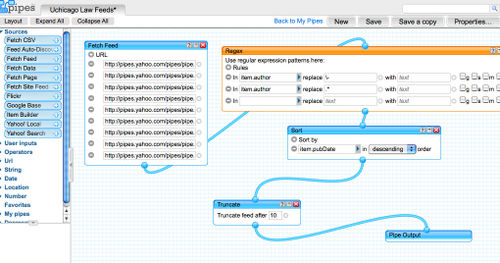 This system is still not perfect — Twitterfeed seems to have a tendency to choke on the feeds created by Pipes, and sometimes posts tweets up to 24 hours after the original post (which sort of negates the immediacy that makes Twitter so appealing).